The Crossrail passenger tunnels at London’s Tottenham Court Road, Liverpool Street and Whitechapel stations are advancing the use of Glassfibre Reinforced Concrete (GRC supplied to Crossrail by GRC UK) into entirely new territory.

Working from a Grimshaw concept design, Laing O’Rourke and Bryden Wood worked together to develop unique uses for this increasingly well-used material: GRC cladding panels for the tunnels that meet very demanding specifications, and, in some cases, rather than steel, GRC structural arches in the cladding system. In fact Laing O’Rourke’s belief in this innovative solution is exemplified by their acquisition of GRC UK to secure their capability to deliver the project. Markus Huber, Board Director Structural and Civil at Bryden Wood says:

“A huge amount of complexity in the shape of the material is needed to accommodate the tunnel design The challenge was to allow for the complex curvature of the tunnels with very limited access and size restrictions and drastically reduced cladding zones.”

The panels had to be light enough to move and install without the use of big equipment, allow perforations for acoustic properties, and be consistent in texture and colour. These stations have also been highlighted by the designing architects Grimshaw Architects, to make an architectural statement.

A very flexible material in its malleable liquid state, GRC can be moulded into nearly any shape and still retain a natural look. The complex curving geometry of the tunnels coupled with limited space and the need to maintain high levels of tolerance inspired Bryden Wood to try something completely new: to use GRC as a structural element. The sprayed concrete tunnel lining meant that engineers were working with uneven, unpredictable surfaces. Huber says:

“We simply couldn’t rely on the wall being where we thought it would be at any given point,”

The solution was to use large moulds to create self-supporting arches that tie back into the wall at as few points as possible. This also allows for movement in the tunnel over time:

“Once we knew the concept worked, it was faster to design the panel than undertake steel work. We could make the surface of the cladding and structure partners together.”

This offered repeatability and scalability.

“At different sized junctions, the principles remained the same, we could just grow or shrink the size of the elements.”

Another challenge was the need for high accuracy of fabrication. Huber continues:

“Part of the design philosophy was to create components offsite with the highest levels of accuracy that were ready to install. The design is put together in a way that removes the need for onsite adjustment.”

The cladding fits together like Lego. At the height of installation, construction teams were installing complex junctions and the self-supporting arches in just two days. And test results show that the GRC performed even better than expected in blast tests and physical tests. The overall result was less on-site installation time and effort, where costs traditionally stack up.

“No one has used GRC to create structural arches in this way. Now we’ve proven it can be done, designers will have the option to use GRC in a structural capacity. Given the increased strength and tolerance of moulded GRC, and the ability to mould into many complex sizes and shapes, this unlocks a wide array of design and engineering opportunities.” 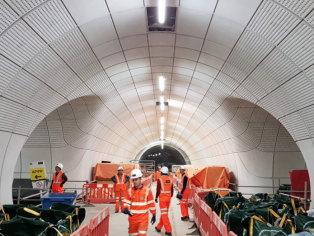 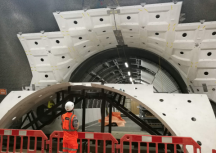 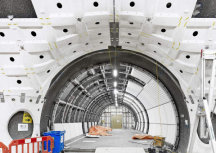