The Brick Development Association was excited to once again host the Brick Awards after a busy but disrupted two years for the construction industry. The Royal Lancaster Hotel in London hosted the awards ceremony with a live audience, celebrating the very best of brick architecture on 10 November.

The judges had the tough task of assessing the best examples of brick architecture submitted by developers, specialist brickwork contractors and housebuilders and brick manufacturers over the past two years.

Innovation is always a fascinating category at the Brick Awards, with the judges seeking projects that demonstrate an innovative application of clay bricks or clay products. This award can be interpreted in varying ways – and tends to ignite a heated debate!

This year we have seen a growing trend in the use of bespoke brick along with the use of digital tools. We have also seen great demonstrations of brickwork contractors using innovative solutions to meet the architects design brief. A number of projects have cut the completion time on jobs by using prefabricated masonry systems.

The shortlisted projects this year were:

Brentwood Preparatory School
The facades of the newly designed school combine both traditional hand-laid methods and contemporary prefabricated techniques. Cottrell Vermeulen Architecture sought to create a seamless whole; to materialise the ideas of the architecture and to celebrate the versatility of working with brick.

By supporting the brickwork via shelf angles to the perimeter at first floor level it enabled the arcade spring points to shift, and allow the corner arches to be open and floating as they wrapped the corners. This was achieved by forming a series of prefabricated steel arched elements clad in brick that were constructed by IG offsite in their Derby factory and craned into place on site in Brentwood. For this project, Ibstock Brick were the manufacturers and Global Brickwork, the contractors.

The wall has the same thickness as a traditionally built brickwork wall, but with up to twice the flexural strength and a compressive strength designed to be 30% higher.

The real innovation of the project, designed by NMCN, was the quick and easy production methods, making installation up to 12 times faster than traditional building methods requiring no skilled bricklayers.

The innovative bespoke bricks, manufactured by Wienerberger and HG Matthews, were designed and made by utilising digital tools in combination with industrial manufacturing processes and ceramic craft techniques. Digitally altered moulds were used to make hand-made textured bricks and double curved scriptural brick capping, designed to drain water from the top of the wall. The architect was Maria Gasparian Studio and the brickwork contractor, Thomas Aginskis.

Three New Bailey
The technically challenging woven elements of this complex facade were achieved through close collaboration with Make architects. Thorp Precast constructed the facades from 650 large scale brick faced precast panels using over 500,000 Ketley brick units and were installed onsite over 13 weeks, without the need for scaffolding.

The hit and miss brickwork in the staircase windows give the impression that it is built using conventional masonry – the bricks visible through the windows from the inside and use of ceramic adhesive in the mould instead of traditional concrete backing.

The use of the latest ultra-high performance fibre reinforced concrete (UHPFRC) technology to make super slim panels, minimised the weight and removed the need for conventional steel reinforcement.

UCLH phase 5
The challenge of this project was that the brickwork – manufactured by Michelmersh Brick Holdings – needed to be built offsite, within precast panels and then driven 200 miles before being craned onto the building facade. The construction process did not need metal reinforcement and has been incredibly well received by designers. As scaffolding was not required to seal the building, working at height risks were dramatically reduced. Pilbrow and Partners were the architects behind this design, working alongside Swift Brickwork Contractors.

Walker Court
The Walker Court project has introduced different heights and structures, bringing a modern present to this historical site. Designed by SODA, the nightclub is overclad using a lattice of hit and miss Bembridge brickwork, manufactured by Wienerberger and Ibstock Brick. The style of brickwork creates a veil like effect and houses LEDs programmed to produce a light show, which peaks through the hit and miss wall. In contrast Tigra Multi (TBS) Glazed Engels Oeffelt was also used, using the stretcher bond, helping to create the contrasts of brickwork. The brickwork contractor for this project is Grangewood Brickwork Services.

York House, Kings Cross
The new brick element is formed from an innovative arrangement of long format clay bricks in a staggered lattice, which form a self-supporting skin around the new highly glazed, CLT structure within. The brick lattice design – as a new addition to the principal elevation – needed to possess a degree of permeability so as to reduce its visual mass. dMFK Architects and Structural Engineers Webb Yates developed a proposal which was inherently efficient, self-supporting and allowed for a high degree of visual permeability. Forterra’s long format block was the ideal fit for the design, with closely-matched colour and a custom perforation arrangement that allowed the bricks to stack using vertical rebar through the overlapping elements, assisting Swift Brickwork in the construction.

See the full list of winners of the Brick Awards at www.brick.org.uk 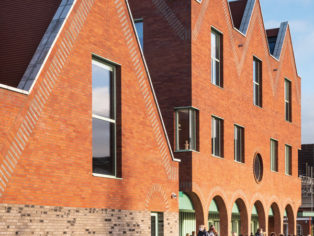 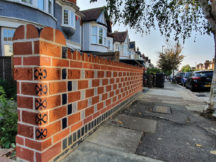 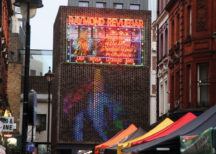