The Court of the Worshipful Company of Chartered Architects has confirmed the results of the London Building of the Year Award 2017, with 8 Finsbury Circus by architects Wilkinson Eyre and developer Mitsubishi Estate London/Stanhope being crowned winner.

WilkinsonEyre was appointed for the £68 million commercial development of the former River Plate House, Finsbury Circus, following a design competition in 2011. Their scheme works to the client’s overall requirements for an ‘exemplary’ new office building in this historic City setting.

WilkinsonEyre’s interpretation of a traditional City building has resulted in deeply modelled Portland stone and bronze facades, detailed in a contemporary manner. A portion of the north façade, dating from the 1920s, has been retained with an existing colonnade opened up to form a new entrance. Juliet balconies and dormer windows within the mansard with their crisp, frameless glazing continue the theme of traditional elements given a modern twist. Castings from the building’s original railings have been retained and embodied into the walls of the entrance.

Runners up are 10 Trinity Square by Woods Bagot, Aukett Swanke and Reignwood Group, and The Monument Building by Make and Skanska Project Development. 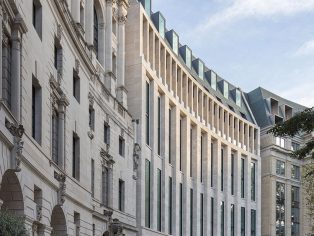 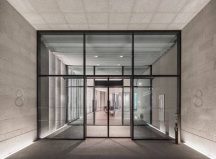