What does it take to get 38 per cent of a BBC vote seeking the nation’s favourite 2015 Sterling Prize nominee? Michael Willoughby travelled to Manchester to look around the Whitworth Gallery, which received thousands of votes.

In the Victorian and Edwardian eras, civic museums were conceived as temples of art. The idea was that, starved of improving culture, visitors would flock to see the collections of the benevolent entrepreneurs. The historical construction of galleries expressed this idea, with collections housed in neoclassical brick, stone and terracotta castles.

Today things are different. These same museums are facing an unprecedented fight for public funding, and need to make sure that they can maintain or increase visitor numbers or otherwise they risk losing out on a slice of the shrinking Arts Council pie. In the case of the Whitworth Gallery, part of the University of Manchester, the limitations of the existing structure were obvious. The sole access to the site was the elaborate, symmetrical Edwardian frontage facing the busy Oxford Road, which declared: in here is culture.

And while the museum, built in 1889 and extended in 1908 for “people of all social classes” to “counteract the malaises of inner city life” was created in a park, the structure failed to show its welcoming side to the gardened area (bounded to the west by the large and infamous housing estate, Moss Side) Instead, the Whitworth proffered a lack of proper landscaping. A fence met would-be visitors. The gallery needed a rethink.

The idea, says head of collections care and access, Nicola Walker, was to reconnect the gallery with the parkland, both in practice, by adding pathways, sculptures and entrances into the rear of the gallery, and visually by creating a glazed promenade gallery with exhibition space and cafe overlooking the park.

A further aim was to double the exhibition space to around 4,300 square feet. The so-called “V&A of the North” contains 60,000 artworks, mostly on paper, as well as flat textiles and wallpapers, but also a small collection of oil paintings and sculpture. The Whitworth continues to collect and has recently benefitted from a large gift from the local Karpidas Foundation.

“The programmes were getting more and more ambitious,” says Walker; “It just wasn’t big enough anymore.” There were already two big galleries and the idea was to make three by bringing back into use a space that had been turned into a lecture theatre in the 1960s. The lecture theatre and event space was moved into the hammer-beamed Grand Hall, which had hitherto been used for storage. A brand-new Study Centre and Clore Learning Studio have been built opening onto the art garden.

The main galleries were improved by stripping out the 1960s-era suspended ceilings to take them back to the original Edwardian substructure. The three galleries were also refurbished with no services on display, leaving pure clean walls.

However, not all of the interiors were stripped out. John Bickerdike’s Loliondo floors and Norwegian stone are added to by materials including oak panelling on the walls and Purbeck stone floors. The idea – and the impact – is that it should be difficult to tell when one is moving from one of the old to the new area.

The retooled interior space is accessed by a brand-new grand staircase with carved stone handles and a wonderful shadow-casting sculpture, Plato’s Disco by David Batchelor, hanging above.

Work on the gallery involved far more than a usual extension. Instead, the new work, designed by architecture firm, MUMA, and carried out by ISG, involved construction of a two-storey extension to the rear which wrapped around the side-elevations of the building. In fact, the expansion is much like the 1908 efforts, which grew around and encased the original Grove House, trapping a cobbled street within the development as it did so.

By far the most impressive aspect of the new Whitworth is the cafe, which one floor up, extends into the canopy of ash trees. The ultra-modernist space makes a great contrast with the brick facade and its angled stainless steel mullions which have the effect of reflecting the light away on all sides.

“Every seat is a window seat,” says Walker, “but the leaves of the trees protect you from the sun.”

Just in case some sun peeps through, however, the glazing is protected with UV filtration, laminated for strength and shatter-proofing and fritted at the top for extra exclusion. The Glass is either created by German glass maker, MBM or local Sheffield manufacturer, Arkoni.

Glass also makes an impressive appearance in the Promenade Gallery which faces out into the park where it is protected by a huge brise soleil that shields both people and artworks from the sun.

On the north side, MUMA created a facade from solid red brick using up to 14 different styles of brickwork as homage to the 1908 structure.

The architects were keen to find a colour that matched the weathering on the original and so worked with Northcot Brick to create a new purplish colour, called the Whitworth Blend.

The intricate brickwork pattern drew inspiration from the Whitworth’s extensive textile collection. The “level of finesse in the brick detailing, coursing, jointing and patterning demonstrating a resurgent craft approach to building” together with “extraordinary architectural quality” won the redevelopment the 2015 Brick Development Association’s Supreme Award.

The Study Centre, meanwhile, benefits from a visual connection to the park, with new ribbon windows looking out onto the orchard garden, featuring cobbles and York stone reclaimed from the original site in a design by Sarah Price. The other side looks into the park.

It was previously housed in a very large area to the back of house, accessed by a keypad with no lift access. Visitors had to make an appointment to study. The visibility of the centre offers an invitation to gallery-goers to engage with the staff.

The Collections Centre was designed as a “halfway house” between the public galleries and the Study Centre, with a series of exhibitions mounted in collaboration with the public to get people used to the idea of interacting with researchers and curators. So, for example, the first exhibition was organised by online voting through Facebook and Twitter. 250 items were chosen from the Museum’s collection and the public whittled it down to 40. The current show was chosen by toddlers, who stuck yellow stickers by the images they liked.

“It’s a through space to invite people into the Study Centre,” says Walker.

For example, they might see a particular artist they like and decide to pursue it further. Access to the collection on computers is also available. The idea is to constantly turn towards the visitor.

The final part of the jigsaw was improving the green credentials of the building. The museum previously had a green roof. The next phase of the development called for an energy-efficient ‘passive first’ mechanical and electrical services installation, including closed-loop ground-source heat pump with energy-efficient boilers and earth tubes providing ventilation to the lower ground floor.

The natural lighting system in the galleries is complemented by LEDs throughout and louvres at the windows.

All in all, the strategy allowed the team to get rid of air-conditioning and chillers and opt for a much more passive approach whereby the new building wraps around the old creating rooms within rooms. The museum is aiming for BREEAM “Excellent” rating.

A Spot of Luck

Funding for the project was £3 million from the University of Manchester, which owns the gallery. £1.5 million came from Arts Council England. A further £8 million came from the Heritage Lottery Fund – in fact additional funds were forthcoming because other projects did not stack up that year.

The extra money made sure that the forecourt of the Whitworth was properly landscaped in preparation for the closure of the Oxford Road to private traffic. This will create another area for events.

While the aim was for 240,000 visitors in the first year, the results are more than double.

“I can’t tell you much about where the audience is coming from,” says Walker, “but from personal observation, we are getting more diverse including international visitors, young people, school children, families… we’re getting all these and more.” 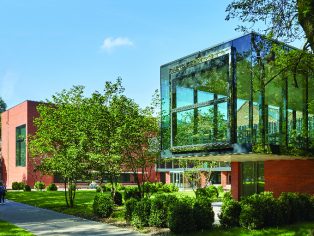 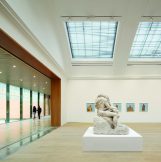