Sarah Harding of Accsys Group reports on how the UK is experiencing a revolution in timber in architecture, as designers and specifiers increasingly embrace the material’s combination of beauty and environmental advantages

Running earlier this year at the Roca London Gallery, ‘Timber Rising: Vertical Visions for the Cities of Tomorrow’ presented an intriguing glimpse into the future of architectural timber solutions. With engaging and in-depth discussions from industry-leading experts throughout the public exhibition, topics such as ‘Forests and Sustainable Cities’ and ‘A Revolution in Construction: Hand in Hand with Nature’ were explored in depth. The panellists – Dr Layla McCay (Centre of Urban Design and Mental Health), Michael Ramage (Centre for Natural Material Innovation at The University of Cambridge), Kevin Flanagan (PLP Architecture) and Elina Grigoriou (Grigoriou Interiors) – have all utilised cross laminated timber (CLT) extensively in their latest projects and research.

Commenting on the context of urban densification and the associated need to build upwards, Clare Farrow, co-curator of the exhibition, pinpointed a key issue: “New luxury towers built of concrete, steel and glass present exciting and symbolic visions of this future, but there is also a flip-side. The problem is that cities already account for 75 per cent of global pollution and consumption of non-renewable resources. In the UK for example, the energy consumed in the construction and operation of the built environment accounts for almost half of the country’s carbon dioxide emissions.” Timber offers a direct solution to this problem; its carbon credentials are unparalleled; it is five times lighter than concrete; and its thermal properties make it an ideal material for both interior and exterior applications. In particular, modified timber provides compelling environmental advantages over non-renewable carbon-intensive materials such as plastics, steel and concrete. The environmental impact of this timber can be assessed at all stages of its life cycle, from cradle to grave.

Kevin Flanagan, partner at PLP Architects, is just one of the many who has recognised the outstanding potential that timber can offer. He has designed a conceptual timber skyscraper at London’s Barbican (discussed on page 6 of this supplement), which was originally intended to be provocative, to test both public and industry reaction. At the event, Kevin Flanagan discussed the key construction benefits: “Timber is very light and extremely easy to manoeuvre and because of this, structures can be built inside a factory and then shipped to site in ready-to-assemble components, meaning much shorter build times on-site.” Furthermore, due to its lightness, timber can also be used to add to existing structures, which may be of paramount importance in an era where overcrowding is becoming an increasing issue. With newfound vertical layering possibilities, architects may now be looking at adding density to existing structures instead of requiring new land. This is a direct benefit of a recent building building code provision that allows for greater soil load-bearing of old foundations once compacted. Flanagan enthused about the future potential: “Within the next five to 10 years, it is extremely likely that there will actually be someone who wants to build one of these. Our clients are wanting a timber structure because it has a special appeal to the market that they are going after and, in this, the final look of a building can be very market-driven.” In this context Flanagan remarked how “products like Accoya wood open up a new world of cladding possibilities – as it has been modified to protect against water ingress and other elements.” It is manufactured using an acetylation process so that even when it is cut or jointed, the ability of the wood’s cell walls to absorb water is reduced by approximately 80 per cent. This structural change greatly improves the wood’s dimensional stability and results in a stronger, more durable product while reducing coating maintenance requirements, making it an ideal solution for cladding applications. Throughout the exhibition, quotes adorned the walls of the Roca Gallery in praise of timber and the progress it has made. One in particular – from Michael Green of MGA (Michael Green Architecture) – truly resonated with the themes of the evening’s conversation. “Buildings of late have become increasingly sculptural in form, largely driven by an aesthetic preference. In nature, beauty is driven by natural forces. In living organisms, beauty and form are not an accident but rather an evolutionary means to propagate and survive. The shape of a tree’s branch is not a rectilinear form, instead it has grown to satisfy the complex structural needs of supporting its leaves, managing wind and reaching for daylight. The branches’ fibres align and thicken where needed, they slim down where not. “Buildings of the future will use these same principles to make forms driven by pure structural need, using less material while creative sculptural forms with true engineering meaning. Only then will architecture truly evolve.”

It would seem that architecture is now truly in the midst of such an evolution. As heard in the panel discussion, it is true that increasingly more architects, interior designers and psychologists are recognising the potential and, indeed, the importance of this material. In creating highly functional masterpieces all over the world which will allow people to live and work more freely and happily, they are enabling people to experience the world through a different medium. 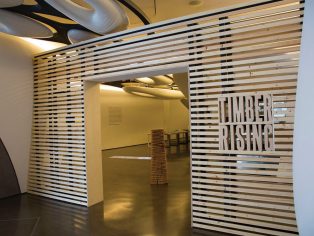 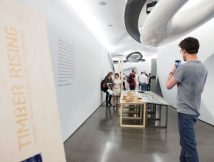