The Restaurant Gütsch reopens after the lockdown

Designed by Studio Seilern Architects, the Gütsch Restaurant on the Swiss Alps is now reopened and calling you above the cloud.

At the heart of the new ski region Andermatt-Sedrun, the Gütsch is at an altitude of 2360m above sea level and at the arrival point of two cable car lines. It houses two first-class gourmet restaurants attracting both daytime skiers and dinner guests from the valley-based Grand Hotels.

Our concept is to create a landmark that is as robust as the dramatic setting of the landscape. The architecture is designed as a contemporary “hameau”, a Swiss hamlet, where a collection of smaller buildings create a harmonious whole.

Inspired by the carved stone sculpture, ‘Horta de Ebro’ by Manolo Valdez, the building is made out of local stone and reflecting the silhouette of vernacular Swiss villages. It caters both for the aesthetic and the climatic challenges of a unique site.

The viewpoint of the guest is always veered towards the outdoors and the size of the windows enable a blurring of the internal dining space and the external landscape.

On the interior, a combination of steamed and roughened pine wood panelling and plasterboard is used. The ceiling consists of glulam beams, which can take the high live loads of snow accumulation during the winter months.

The bar of the Japanese consists of a reconstructed stone sculpture, giving it an appearance of massiveness. In contrast, the white steel chimney hangs lightly from the ceiling. In the Gourmet, the bar is made of a colourful terrazzo, giving it its distinct identity. 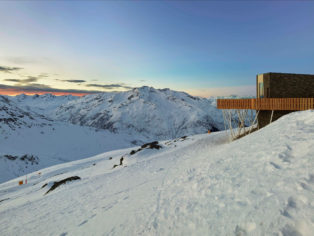 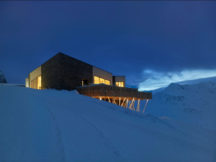