With greater focus placed on healthier environments in addition to performance and sustainability, there has been increasing interest in lesser-known technologies. Mark Lynn describes the compelling benefits of natural insulation.

We have long been familiar with the use of natural fibres in clothes to keep us warm and comfortable, so it is no surprise that we should look to extend these benefits to the built environment.

Natural fibre insulation materials (NFIs) such as sheep’s wool, hemp, flax and wood fibres are commonly used in a variety of roof, wall and floor solutions and their application is growing.

NFIs can take the form of quilts, boards or loose-fill. Quilted insulation takes a form similar to mineral wool insulation and is usually made from sheep’s wool, hemp, flax or jute. Wood fibreboards are made from fine wood fibres compressed together to form rigid boards, whereas loose cellulose fibre can be blown into voids.

In the UK, coarse British wool, which is not suitable for fabrics or carpets, is widely used for insulation. Its irregular structure gives body to the insulation and also helps the absorption of sound across a wider range of frequencies. When wool is combined with an inert binder to prevent slumping, the insulation remains effective for the life of the building.

As well as reducing heat loss, natural wool insulation has a host of important performance, health and sustainability benefits.

NFIs are known for their superior sound insulation properties compared to man-made materials. This can be attributed to the relatively high density of NFIs compared to their conventional counterparts and the irregular nature of natural fibres.

Managing heat gain in warmer months is often more important than preventing heat loss. Overheating is a frequently overlooked problem caused by factors such as poor ventilation or excessive solar gain. Heat penetrating the building fabric from outside can be particularly problematic when it reaches the inside of the building during the warmest parts of the day. Specifying NFIs can go a long way to addressing this issue.

The relatively high thermal mass of NFIs can slow the rate of heat penetration, allowing the highest levels of heat to reach the inside of the building later in the day, for example when temperatures are cooler. What’s more, natural fibre insulation can release the absorbed heat quicker than materials with high thermal mass, such as concrete, reducing the risk of heat build-up. In effect, natural insulation acts as both a heat shield and a heat buffer.

Natural fibres absorb water vapour by binding water within the chemical make-up of the fibre itself. This occurs through weak chemical bonds so the water actually becomes part of the natural fibre rather than condensing on the fibre surface as liquid water. Because the bonds between water and fibre are weak, the water can be easily released as humidity drops. This process enables natural fibres to hold nearly 30 per cent of their weight in water and still be completely dry to the touch, thus reducing risks associated with damp.

As well as its ability to control moisture and heat levels, natural fibres such as wool can remove certain indoor air pollutants, such as formaldehyde, that are used in binders and glues in many products. This way NFIs contribute towards a healthier indoor environment. Wool acts as a filtration material in a two-stage reaction that removes formaldehyde from the air and releases water.

Using NFIs in the UK brings further sustainability benefits, not least that we have a good supply of local, rapidly renewable natural fibres. In addition, natural fibres typically contain 50 per cent non-fossil carbon, so using these materials in durable long-life end-uses such as insulation is an ideal way to store carbon while utilising a valuable local resource. 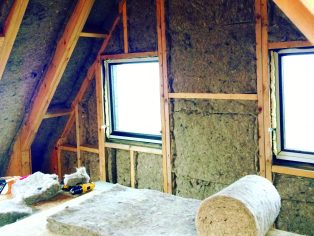