The building, which is wholly-owned by Bloomberg and brings its 4,000 London employees together under one roof, is BREEAM Outstanding with a design-stage rating of 98.5 per cent, the highest such rating of any major office building. Innovative natural ventilation strategies using bronze fins combine with bespoke-designed ceilings to provide a high degree of sustainability as well as user comfort for employees.

The architects said that the building “responds to its historic context, yet is uniquely of its place and time.” Materials used include 9,600 tonnes of Derbyshire sandstone for the building’s frame, American red oak, granite floors and extensive bronze cladding for the curving ramps that run through the open interior. Foster + Partners ensured that 90 per cent of the materials used were sourced from the UK.

“Our building aims to empower our employees, while completing and adding life to this historic neighbourhood. Lord Foster’s spectacular design brings people together in ways that will promote collaboration and communication, and forges new frontiers in sustainability that we hope will serve as a model for other companies.”

The building has been designed to save 73 per cent of the water consumption of a normal office building, and includes substantial rainwater harvesting. It is intended to save 35 per cent on energy consumption following rigorous research and testing of 1:1 models pre-construction.

The site includes three public plazas, and the building is divided by an arcade providing a new pedestrian thoroughfare. Bloomberg also commissioned artwork for the building’s interior from a range of artists including Michael Craig-Martin, Olafur Eliasson and Langlands and Bell.

Lord Foster described the close working partnership between practice and client that brought the scheme to fruition:

“Above all we had a shared belief that we should provide the highest standards of sustainability and wellbeing for occupants, as well as create major new public spaces at ground level.

“We wanted the building to have integrity and continuity of expression both inside and out, creating an inspiring, innovative and collaborative workplace.”

Mayor Sadiq Khan said that Bloomberg opening a new European base in London showed that it regarded London as key to its operations, notwithstanding Brexit:

“This fantastic new building is a huge vote of confidence in London as a destination for global business. The fact that London will continue to be the home of Bloomberg’s European operations shows London is open for business.”

The project also restores and recreates the ancient Temple of Mithras on its original site under the building, which will open free to the public in November as the London Mithraeum Bloomberg SPACE. 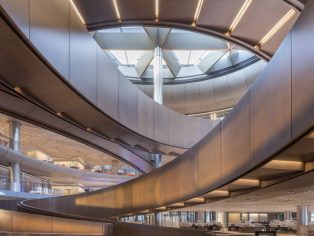