The 313,000 sq.m. new terminal building has been designed to be extremely user-focussed, efficient and adaptable for future growth; its six-pier radial design gives exceptional convenience for passengers and flexibility in operations.

Evolving from principles within traditional Chinese architecture that organise interconnected spaces around a central courtyard, the new terminal’s design guides all passengers seamlessly through the relevant departure, arrival or transfer zones towards the grand courtyard at its centre – a multi-layered meeting space at the very heart of the terminal.

Flowing parabolic folds within the terminal’s vaulted roof reach to the ground to support the structure and bring natural light within, directing all passengers towards the central courtyard.

Designed to adapt to operate in many different configurations dependant on varying aircraft and passenger traffic throughout each day, the new airport will include an integrated transport centre offering direct links to Beijing city centre, local rail services and the national high-speed rail network.

Flight operations at Beijing’s new international airport are expected to begin in 2019. 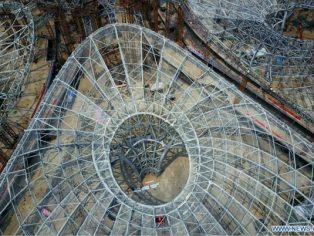