A new survey has reported an increase in activity in the UK construction sector, despite current political uncertainty.

“We have partnered with several customers to deliver systems for high-end projects including the Pinnacle building, Eagle House’s luxury apartments and a six-floor Grade A office space.

“Many of these have been based in or just outside of London and show that people are still willing to invest in the UK; with London the natural centre of gravity for activity in the UK.”

Leon says that with a rise in new construction projects has come increased demand for Hueck’s aluminium building systems.

A lot of challenges have faced the aluminium market in 2016 including Brexit, the China slowdown, sluggish pricing, the commodity super cycle and interest rates.

But, globally, aluminium demand has surprised on the upside in most regions so far this year and is seen growing five percent in 2016.

In Europe, demand is set to remain stable long-term, despite political uncertainty. Reforms to the London Metal Exchange’s global warehouse network have cut the amount of metal trapped in storage and, despite uneasy trading on the LME, aluminium in construction is doing well.

“Aluminium is a light, strong, long life material. It is also a green material as it is 100 per cent recyclable, with re-melting only requiring five per cent of the energy required to produce the metal in the first place.

“As such, it is ideal for many building and construction applications and our high-performance systems meet the stringent requirements for functionality, energy efficiency, architectural flexibility and design that are in demand at the luxury end of this market.”

HUECK is one of Europe’s largest manufacturers and suppliers of aluminium window, door and façade solutions, specialising in both standard systems, as well as and bespoke applications.

The company offers a wide choice of profiles, all of which are designed to integrate with each other. In addition to the Lambda and Trigon ranges, HUECK also manufactures the innovative Volato suite of sliding systems, as well as a range of fire protection systems. 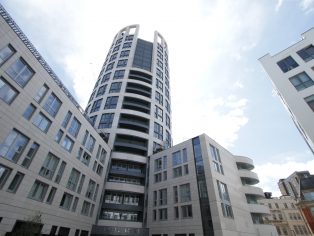