Reynaers systems unite form with function at Barco One

Alternatively known as ‘The Circle,’ the project uses transparency as a key theme. The glass facade was designed by Jaspers-Eyers Architects to form a skin around the circular building’s open plan central atrium space, where daily activities are illuminated with a full 360 degrees of natural light.

The interior functions of the building correspond to its exterior, bringing the facade to life. Strong horizontals to the upper levels provide solar control for the interior, while a grand staircase in the atrium makes itself apparent on the exterior as a dynamically sloping line. Further emphasising exterior connections, a water feature flows from indoors to out, blending the building into the landscape.

Architect John Eyers explains that the circular form of Barco One contributes to its social function, as well as making it a centre point between other buildings on the campus in Kortrijk, Belgium.

“The unique rounded shapes and the internal connections ensure that employees bump into each other more often and create an active ambiance. The oval-shaped ‘meeting decks’ stand out, appearing to float in space. Passerelles to the fixed core of the building balance the structure and ensure a constant level of activity.”

The facade was also designed to reflect Barco’s brand and allow its technological innovations to be demonstrated. These include an entertainment room showcasing its beaming equipment, as well as a cinema for its audio tech. Internal walls are finished with a taut, sleek appearance to become projection screens, immersing visitors in Barco’s products.

A total of 7,900 square meters of glass and aluminium systems were installed across Barco One in close collaboration between not only the architects and Reynaers, but also Cordeel as the contractor and aluminium construction experts Belgo Metal BV.

Accounting for almost half the facade, a custom-made CW 50 reversed solution with slim profiles from Reynaers allows for a maximum entrance of daylight and adds complexity to the design. This means that the structural element of the wall is positioned to the exterior of the building, with only the narrow trim caps of the curtain wall itself visible to the interior.

“This bespoke variant of our CW 50 curtain walling system improves transparency and outward sightlines to match the architect’s design goals. The addition of a glass roof means that The Circle is filled with light, reducing shadows in the atrium. Whilst an all-glass building makes energy-efficiency and temperature control a challenge, Reynaers’ systems offer a thermally efficient standard.

“Challenging projects can be the most fulfilling, and this is a fantastic example of how we can produce bespoke solutions to make architects’ creative ambitions a reality. Barco One has achieved iconic status by combining clever design with ease of usability for staff and visitors that matches the Barco brand.”

A 360 video and tour of the Barco One campus is available here. 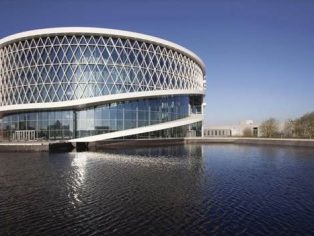