A timber cabin in the woods, designed as a tranquil Cornish rural retreat, has been carefully crafted from reclaimed, natural and sustainable materials

As a Cornish farmer, Bob Coad has always held strong opinions on ecology and the merits of sustainable building, so when it came to designing a woodland cabin on his own land there was no question that the project would be as environmentally benign as possible.

“There had been a caravan on our farm for almost 40 years which was occupied by a retired farm worker, Andrew, who grew all his own vegetables – giving away the surplus to friends in the village,” explains Bob. “Andrew died when he was in his late 80s, so we needed to move the old caravan and decide what to do with the small piece of land where it had stood.”

Bob and his wife, Pat, planned to build a secluded woodland cabin on the plot using local, natural materials and causing as little disruption to the immediate area as possible.

“Andrew was a master of make do and mend,” says Bob. “After a lifetime spent working on farms he lived frugally in the caravan and discarded very little, spending his time gardening, repairing hedges and walking
his dog.”

Andrew’s consideration and knowledge of his natural surroundings inspired Bob and Pat to design something simple and rustic, which they could rent out for holidays to people in need of a rural escape – creating an additional income stream.

The couple grow crops and raise sheep and cattle on their 350-acre farm, in the quiet village of Cubert on the north coast of Cornwall, five miles from the busy seaside resort of Newquay and within walking distance of Holywell Bay.

“My father originally bought the narrow strip of land as part of the farm and then it was passed to me while Andrew was still living there,” Bob explains. The land stands between an old barn and a field, and is edged with elm trees, making it a peaceful setting with long views towards the sand dunes.

Although the couple had a vague idea about building a house in the woods, they soon realised that expert guidance would be needed as this was their first new build project.

“I got O-Level woodwork at school, but that didn’t really equip me for building a cabin, so Pat went to the Cornwall Home and Lifestyle Show, where she met Stuart Bowman-Harris on the Good Life Joinery stand.” He adds: “I then had a chat with him on the phone and visited an oak-framing project he was working on.”

The Good Life workshop is in Canworthy Water near Launceston, in the heart of the North Cornwall countryside, where a team of experienced craftsmen design and make kitchens, staircases and furniture, as well as oak frames, windows and doors.

“The workmanship is fantastic, they use traditional carpentry methods, which is exactly what we wanted,” says Bob.

Stuart Bowman-Harris recalls the first time he visited the site, on the back of Bob’s quad bike.

“We went up an overgrown track and there, nestled in the trees, was this decrepit caravan,” says Stuart. “There’s a certificate of lawfulness for the site, and the size, construction and mobility of a replacement building all needed to be taken into account.”

Stuart worked with Bob and Pat to design a single-storey timber building which, at just 41 square metres in size, is only slightly larger than the old caravan previously occupying the site. There was already a phone line and mains water but no mains sewage, which needed to be installed, and steps lead up to the site from a designated parking area.

“It’s such a special, private setting that we didn’t want to disturb it more than necessary and the piece of land isn’t very wide, so these constraints were taken into account at the design stage,” says Bob. “Stuart made a sketch, which we reduced slightly in height, and that formed the outer shell of the building. It would have been nice to make the cabin a bit wider, but that would have involved moving soil, which we didn’t want to do.”

Work began in 2017 to prepare the site, carefully scraping away a minimal amount of the ground and clearing dead trees. The structure was supported on concrete plinths, which sit on the ground and are suitable for heavy-duty applications of up to 2.5 tonnes per plinth.

“I designed the cabin on trailer wheels which Bob had on the farm, with the chassis made by a steel fabricator, so that technically you could move the whole building,” says Stuart, who thoroughly researched the project. “Steel wire ropes were fired into the ground using a petrol-driven machine, then attached to the chassis to anchor the building.”

A suspended timber floor with a chipboard topping was put down, onto which the stud walls were built. Good Life Joinery was responsible for the entire build, which was completed using timber grown on the Devon/Cornwall border.

“They prefabricated the panels offsite, so it only took about two weeks to put together, including roofing and making it watertight,” says Bob, who helped by labouring and physically manhandling materials up the narrow track from the farmyard where they were stored. “Stuart was such a good find, he takes pride in his work and is a real craftsman. His biggest problem was probably putting up with me!”

Thermafleece insulation was chosen for the roof, walls and floors. It is made from a combination of natural sheep’s wool and recycled fibres, with all wool sourced only from British farms – a key requirement for Bob and Pat.

“I detest all these plastic, chemical-based products, and so many modern insulations irritate the skin when you handle them,” Bob explains. “I think a farmer’s wife first had the idea of using waste wool as insulation, and as farmers ourselves it seemed the perfect product to use.”

Galvanised guttering and Big Six profile corrugated fibre cement panels were chosen for the roof, in keeping with the rustic, agricultural feel of external vertical larch cladding, which has been left untreated to weather naturally.

Low maintenance aluminium-clad windows were installed and sliding aluminium glass doors have been fitted across the front of the cabin, opening the main living space to views through the trees. Instead of curtains, sliding external wooden shutters were made by Stuart to resemble old barn doors.

Once the shell of Juneberry cabin was complete, Bob and Pat contacted Cornish-based holiday letting company, Unique Home Stays,
to discuss whether they would be interested in collaborating on the interior finishes, with the aim of being added to their portfolio of holiday homes.

“A friend recommended the company and we were put in touch with interior stylist Tabitha Barker, who worked with us and was able to visualise exactly how the rooms would look – right down to the fine details,” explains Bob, who admits he would probably have decorated the interior with simple white paint if left to his own devices, rather than the sumptuous deep teal shade which has been used throughout.

“One of the major changes we made was to increase the size of the Douglas fir deck, so that it wraps around the outside, with sets of steps leading up on two sides, whereas originally it was just going to run along the front,” he says.

With space at a premium, clever internal planning was key to the cabin’s success, and most of the interior has been left open plan as a living/dining/kitchen beneath a high sloping roof. The ceiling was clad with quirky corrugated iron sheets, salvaged from a dilapidated old barn on the farm and fitted onto plasterboard with a half-hour fire rating to meet Building Regulations.

“Where possible we’ve used recycled items, and like a lot of farmers, I don’t tend to throw anything away, so we had timber and other materials already on the farm,” says Bob. “Bedside lights were reused from the old touring caravan which previously stood on the site, light shades in the living room were taken from a grain store, and the kitchen was made by Stuart from wood panels, which we reclaimed from an old factory and kiln dried.”

A woodburner was fitted in the open plan sitting room, and the dining table and other furniture was rescued from the old caravan and given a new lease of life.

A spacious king-size bedroom has been positioned to one end of the cabin and benefits from a side window and glass doors straight out onto the deck – affording fantastic views from the bed over a rolling patchwork of fields. Teal walls contrast with the engineered oak wooden flooring, which was laid over electric underfloor heating throughout.

“I was wary of having a wet underfloor heating system, in case of leaks, and the electric pads are also quite slim,” says Bob. “A solar thermal panel on the cabin roof heats our water, and we may also add a photovoltaic panel in future to generate electricity.”

Copper accents, a bathtub for two and a walk-in rainfall shower were chosen for the spacious bathroom, which was positioned to the other end of the cabin beside the kitchen. The ceiling is clad in corrugated steel, and walls are covered in a combination of teal-painted timber planks and convincing timber-effect porcelain tiles, laid in a herringbone pattern in the shower and behind the bath.

“We hadn’t originally envisaged fitting a bath, but our designer suggested it would be a good idea,” says Bob. “The sink came out of the old caravan, and Stuart then built the cabinet for it using reclaimed timber, as well as panelling out the bath. He also made sliding barn-style doors for the bedroom and bathroom, which save space and continue the farm theme. Even the tap pipework was exposed.”

Outside, the landscaping has been left as natural as possible and was planted with apple trees, honeysuckle, primroses, poppies, cornflowers and various other pollinators by Pat, who took charge of this aspect of the project.

Suntrap decking looks across two lawns and a wood-burning firepit was set into the ground and surrounded by large stones, with heavy galvanised water tanks used as a plant feature. The garden is secluded and peaceful – filled with only the sound of birds, drawn by strategically placed feeders and the mature trees on site. There is even a resident pheasant.

“It took about 18 months to build the cabin, because everything was handmade, but we weren’t in a rush and spent time getting it exactly as we wanted,” says Bob, who admits he never has a holiday from the farm, which takes up all his time.

“Once the shell went up, we had a break before starting on the interiors, and all the way through the build we focused on reusing and recycling. Nothing was removed from the site and the whole cabin is as kind to the environment as we could make it – which
is really how all building should be in an ideal world.” 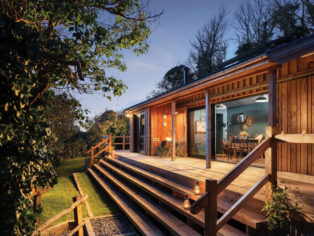