Two case studies in Wales and central London have recently seen the use of natural slate roofing to provide the right result for their respective renovation needs.

Two prestigious heritage projects have recently benefitted from major refurbishments employing natural slate to deliver the requirements of architect and client. Slate roofing in addition to walling and flooring was supplied for the redevelopment of Cardigan Castle in mid Wales, and in London’s Kings Cross a refurbishment of a 19th century gymnasium used substantial amounts of slate for its authentic replacement roof.

The £12.5m redevelopment of Cardigan Castle was essential to prevent this 13th century piece of national heritage being lost forever. Penrhyn Heather Blue slates from Welsh Slate’s quarry at Bethesda, Gwynedd, were used to re-roof the main building within the castle walls, Castle Green House (Ty Castell) plus The Stables, while 200 m2 of dark blue grey cleaved walling from the company’s Cwt-y-Bugail quarry clads the interior and exterior walls of a new contemporary restaurant, ‘1176,’ whose structure cantilevers over the castle walls.

The materials were specified by Purcell architects who worked on the repair and regeneration for 10 years. Project architect Izaak Hudson comments:

“With this being one of the most significant historic building projects recently completed in Wales, all of the project team were very keen to be able to use local materials where we could.”

WEFO (Welsh European Funding Office) funding for the project from the European Union, administered by the Welsh Government, was granted with the aim of using Welsh materials and contractors. This, says Hudson, was one reason Welsh Slate was selected, as well as to match the existing slate on site, and “because it was historically appropriate and good quality.”

“expertly re-laid by skilled roofers from Tree and Sons of Milford Haven,” says Hudson. “The wet laying took some time as due to the weight of the huge Penrhyn slates we had to wait for the lime mortar of lower courses to carbonate before laying more, but it was a key existing feature and Cadw were very keen to reinstate it.”

six buildings within its walls being listed Grade II or Grade II*, by the end of the 20th Century the site was derelict and its buildings open to the weather. The curtain walls were propped up with great raking shores to prevent collapsing onto the town’s main road.

Following Ceredigion County Council’s acquiring the site from its elderly owner a group of local people set up the Cadwgan Trust to fund restoration and Purcell architects were commissioned in 2005 to carry out an options appraisal. Future potential uses identified included heritage interpretation, a restaurant, holiday

Phase one of the redevelopment was the £1m repair of the curtain walls; Phase two being the conservation and upgrading of the six buildings within the castle walls plus restoration of the Regency gardens. The comprehensive conservation works ranged from structural carpentry repairs, to slate roofing, leadwork, masonry repairs, external joinery repairs and lime rendering.

Purcell carried out careful research, along with trials and testing of materials and finishes, to ensure the building would be an exemplar for innovative conservation practice. The decision was taken to locate the new restaurant building above a section of the castle walls which had collapsed in the 1970s. The striking cantilevered design provides views, via large glazed elevations, across the quayside and the river below and inwards across the castle gardens.

Solid external and internal walls were constructed of coursed Welsh Slate laid by specialist stonemasons, echoing the Cilgerran slate garden walls that form the backdrop to the site.

Izaak Hudson concludes: “It was a very challenging and interesting project – and we learned a lot about slate.”

Natural roof slates are a key part of a refurbishment at the heart of the regeneration of Kings Cross, which recently picked up a top award in the 2016 Restaurant and Bar Design Awards.

Some 6,400 natural slates from Welsh Slate have helped restore the roof of the German Gymnasium, the first purpose-built gym in England now converted to a high-end restaurant – to its former glory. Designed by Edward Gruning and built in the 1860s and funded solely by the German community in London, the Grade II listed Gymnasium was created with the intention of promoting strength-based gymnastics for adults. The indoor events of the first Olympic Games were held there in 1866, continuing until the 1908 Games.

Converted to offices for the Great Northern Railway after the First World War, the emerging regeneration of Kings Cross together with the demolition of surrounding buildings have changed the building’s context. The surrounding public realm has become a more dynamic space, and the building is now both a way-finding landmark and a destination in its own right.

More than 600 m2 of 500 mm x 300 mm Penrhyn Heather Blue County-grade slates were used on the main and clerestory roofs and flank roofs of the dormer windows of the Grade ll listed building. They were specified by architects Allies and Morrison after the original Welsh Slate roof (also an important early example of the use of laminated timber to enable broad spans) was removed and the building was left with only a bituminous felt covering the structure. They also match the slate roofs of the adjacent St Pancras Station and Great Northern Hotels.

The new roof, over trusses up to 20 metres wide, was installed over four months by Attleys Roofing. They needed multiple, small deliveries due to the tight site, lack of storage and range of materials required – including insulation, vapour control layer, counter battens, felt, and battens.

After a 17-month rebuild the renovated building was officially opened to the public by restaurant group D&D London in November 2015. Allies and Morrison were commissioned by developer Argent to restore and repair the fabric of the building to a shell and core finish to enable subsequent fit out by Conran and Partners, who established the restaurant concept design which includes a new steel mezzanine and staircases.

Andrew Rixson of Allies and Morrison comments: “The design of the roof is complicated by the increased depth of the new roof build-up which sets the new slate tiles above the level of the brickwork details of the existing gable parapets.

To resolve this, the design separates the slates from the brickwork by introducing hidden gutters, valleys and leadwork detailing around the perimeters.

“These details are adapted into various different forms due to the variety of conditions found within the existing roof and the deformation of the timber roof structure over time, but reconcile the precisely constructed new roof elements with the unevenness of the Victorian brickwork.”

“The slates could be used in a consistent tile size with even colour and their fixings hidden by the overlapping of each tile. We were also able to resolve design problems using the integrated and unobtrusive service penetrations, which are pleasing architecturally and from a conservation perspective, by avoiding the need for a proprietary vent pipe.” 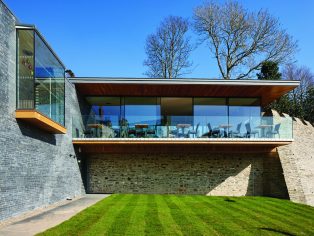