Architectural glazing systems by leading UK manufacturer Kawneer played a key role in a new state-of-the-art building which is at the heart of Wales’ creative and digital future.

Specified by BDP architects, they were installed over 10 months by a team of up to eight from Kawneer-approved dealer APiC UK for main contractor Kier Construction.

The AA®110 zone-drained curtain walling with 65mm sightlines was used alongside Kawneer’s thermally superior AA®720 doors and series 190 automatic entrance doors on the ground floor which houses a spacious public cafe alongside performance space and auditorium as well as resources for community groups and offices for the building’s administrative staff.

And it also features on the third floor, which is let to a number of different companies working in the creative and digital sector, as well as on a clerestory lantern above an atrium which overarches the three storeys. Many of these tenants will offer work experience to UWTSD students, allowing them to make the most of the university’s connections during their studies.

BDP’s award-winning design was based on the close relationship between the university, prospective tenants of the centre and the wider community. This relationship, or trinity, is reflected in its form – a simple triangle that grows from Carmarthenshire’s soil, a titular reference to Yr Egin – a Welsh play on words referencing energy and birth.

The layout of the building encourages collaboration, communication and interaction between all users of the building, where initial ideas can be shared and developed – an incubator for the establishment of new companies and a breeding ground for a new generation of creative and technical people.

Externally, the theme of trinity is expressed through the use of differing materials in a tripartite arrangement – a dynamic, reflective volume is seen to float over a solid plinth at ground level and a translucent intermediate layer reinforces the distinction between plinth and reflective object.

The 3,600m2 building is linked to the main campus by a large public square which allows for the staging of a variety of outdoor activities in its stunning Carmarthenshire location between the Pembrokeshire coast and the Brecon Beacons.

On the use of Kawneer’s systems, BDP’s project architect noted:

“As most of the façade comprises curtain wall we needed a system that could meet a wide range of performance requirements. We specified Kawneer due to their extensive range of features which met the functional and aesthetic demands of the project.

“The Kawneer curtain walling had a key role in the project. As a naturally ventilated building it has an active façade that reacts to changing environmental conditions. The Kawneer system houses the various components that protect the interior from the elements while allowing air to flow through.

“A key element of the building’s aesthetic was to create a distinct character for each level of the building – a challenge for a facade almost entirely constructed from curtain wall. This challenge was met by the extensive range of Kawneer features, especially the fin capping, which was vital to the characterisation of the different elements of the facade.”

The durability, strength to weight ratio and life cycle benefits of aluminium were key factors in the consideration of Kawneer’s system when specifying the external envelope.

“Working with Kawneer we were able to offer solutions for all the differing project requirements including profiled vertical faced caps with new dies for the 100mm and 150mm profiles to the ground-floor curtain wall which was specified to accommodate the vertical movement of the building.

“The 100mm, 150mm and 200mm vertical faced caps provide a strong vertical emphasis to the curtain wall. The use of differing sizes and finishes to these are designed to provide a ‘flickering effect”.

Canolfan S4C Yr Egin was opened by the Rt Hon Carwyn Jones AM, first Minister of Wales, in October 2018 and has since won a RICS Wales award for best commercial building.

RICS judges said the team behind the project – including Mott McDonald, BDP, Rural Office for Architecture, and the University of Wales Trinity St David – had succeeded in designing a scheme that encouraged occupiers to collaborate, network and exchange information and ideas, to innovate and create jobs. 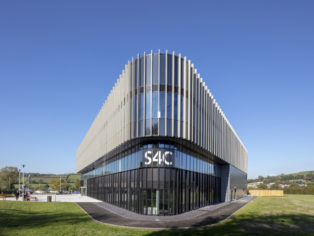 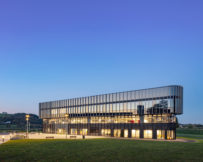