The Maurice Wilkes Building, gateway to St John’s Innovation Park in Cambridge, is a Kawneer landmark.

When it came to specifying architectural glazing systems for a £15 million prominent building on St John’s Innovation Park in Cambridge, Kawneer was chosen by Barber Casanovas Ruffles Architects as the preferred aluminium curtain walling system supplier.

The leading UK manufacturer’s AA®110 zone-drained curtain walling with 65mm sightlines and two types of commercial entrance doors – thermally superior AA®720s on all elevations and heavy-duty series 190s for the main entrance – have been used on the Maurice Wilkes Building. The curtain walling “windows” were set out on a 1.5m grid to allow future flexibility to the tenants’ fit-outs.

“Kawneer is one of the preferred specifications for the practice. We specify it because it is tried and tested and a quality product that is value for money.”

The brief from St John’s College, Savills and development partner Turnstone Estates was for a flexible landmark speculative office building. The circa 2.5-acre site straddles two planning authorities and through careful design and negotiation has satisfied all the clients and local authorities requirements.

The 65,000ft2 building has five floors of flexible office accommodation topped by a partially-covered roof terrace.

Full-height glazing to both the south and north entrances provides the building with an identity and sense of approach from both of these prominent building features. To the south, the full-glass facade to the central section makes a showcase of the building form by providing separation to each wing, while to the north, the primary entrance sits in front of a double-height entrance space with projecting office accommodation over.

The glazing design responds to the building’s orientation, requiring views into and out of it, as well as responding to the building’s external design and the function of the internal spaces. Kawneer systems interface with the cladding throughout as the windows are punch hole-style in a trabeated design form.

“The Kawneer systems play an important part of the design to each façade.  Each have detailed projecting caps to provide a third dimension to the window mullions, assist with the thermal modelling and also mix the colours to accentuate the module. All products used on the building were considered for the overall sustainability of the building long-term.”

Constructed in 16 months by Vinci Construction, using a reinforced concrete frame with infill structural framing system and rectangular panels of bronze-coloured rainscreen cladding, the black and silver coloured Kawneer aluminium systems were installed during the contract by a team of operatives from approved dealer APiC UK.

“The curtain walling screens with differing vertical and horizontal projecting face caps complement the adjacent materials. In addition, the main reception area has a double-height curtain walling facade which provides a stunning entrance to the building.”

The building achieved the accreditation of BREEAM “Very good” and boasts a low air tightness value. It secured a majority of tenant pre-lets off plan and is almost fully occupied. 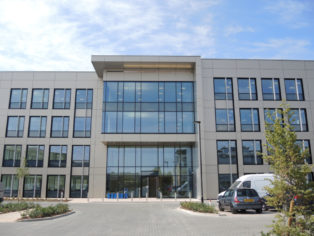 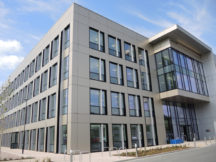