Architectural glazing systems by leading UK manufacturer Kawneer, including aluminium heritage-style windows appropriate for the conservation area, have helped to transform the facade of an old radio and television factory into the new London Screen Academy.

The GT70S windows with narrow sightlines were installed over 12 weeks by a team of eight from specialist sub-contractor and Kawneer dealer JPJ Installations throughout the 8,050m² building, with the AA®100 curtain walling, which also has narrow 50mm sightlines, used on the rear elevation and the series AA®190 TB severe-duty welded doors used on the main entrance.

Procured through the Southern Construction Framework, main contractor Willmott Dixon Interiors worked closely with the design team from Architecture Initiative to deliver the project over 13 months, ready for the first intake of students in September 2019. Sponsored by Working Title Films, the end user is the Day One Trust.

The building, also formerly a London Metropolitan University facility, was subject to a dramatic internal reconfiguration, with the core of the deep-plan multi-storey industrial space demolished and replaced with a steel-framed three-storey film production studio and supporting facilities.

The general teaching and workshop spaces wrap around the centre core, responding to and utilising the existing external envelope which has remained largely unaltered in appearance. The insertion of a new rooftop courtyard with film theatre and extensive views over London completes the arrangement and provides informal social space for staff and students.

Architecture Initiative’s brief was to design a creative education facility that would provide an inspirational learning environment alongside specialist technical facilities to train students in all aspects of digital and film technologies.

“We combined the natural features of the existing building – large windows, generous floor-to-ceiling heights, exposed finishes – with state-of-the-art new technical training facilities based on extensive research and analysis of professional film studios, to create a unique building for students and the wider community.

“The building is in a conservation area so any works to the external facade were carefully considered. We also needed to work with current building regulations for schools to ensure we could provide a safe learning space but which also enabled us to make the most of the existing building and provide professional standard technical spaces.

“The local authority planners were really happy with the upgrades to the existing building facade which had been unsympathetically altered in previous times.”

“The external windows are the focal new element of the facade renovation. The Kawneer window system, which was offered by the contractor as a more cost-effective alternative, effectively met the technical requirements needed while achieving a 1930s warehouse “Crittall” window lookalike.

“The windows have greatly enhanced the existing facade as well as referring to the building’s history with its design. The final product was of great quality and in keeping with the design concept.”

“The facade has been visually transformed, in part through the addition of the new windows that are perfectly in keeping with the heritage of the building. From a previously dilapidated appearance, the building has been rejuvenated. We are extremely happy with such an incredible looking product.”

The creation of the London Screen Academy follows a recent report published by the British Film Institute which suggested the money spent on production in the UK reached a record level of £3.16 billion across all sectors including film, television and console games. Production investment in the UK has grown by 63 per cent over the four years to 2016. 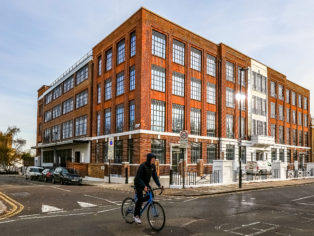