The project focuses on the complexities of housing crisis in London and Spain questioning contemporary modes of production. Studying systems in architecture and digital fabrication methods, the project proposes a fully automated mode of production embracing a post-capitalistic scenario. An online-distributed construction system is designed putting forward discrete manufacturing methods for the production of rapid mass housing prototypes.

Over the last few decades, the gap between those who produce and use housing has massively increased. Cities like London are characterised by an oligopoly of big developers offering one-size-fits-all housing and an increasing lack of affordability with only 20% of the population being financially able to build a house. Contemporary modes of production are no longer rational. As a reaction to this, a very different kind of housing industry has emerged, an open-source paradigm, which is focused on growing the housing supply for the ‘long tail’ of individuals seeking to self-build their own housing. Architecture can now be accessed online, blueprints can be downloaded with a click of a button and a kit of parts can be fabricated without the need of a professional.

This is possible more than ever today due to ‘Fourth Industrial Revolution’. With the expansion of the Internet of Things and the development of digital technologies accessible to all, users are empowered to become prosumers with almost zero marginal production cost. A new era has arrived that embraces a more collective and democratic paradigm. The Maker movement and open-source culture of today have enabled the decentralisation of production, which can now occur even by amateurs in local technology hubs or private garages.

The project studies systems in architecture and proposes an open-source construction system based on robotic foam cutting technologies. An architecture composed of limited parts and connections which allow for rapid and efficient deployment of an open-ended housing product. The discreteness of the system allows for great levels of scalability and expansion, while it enables building assembly to occur much faster than in traditional modes of production and with reduced margins of error.

In an open-source paradigm in architecture, the role of the architect shifts from that of a designer of a predefined product to that of a framework, within which users can directly intervene and customise it according to their personal needs. Depending on the scale of the architectural product, users can either take full responsibility of building their house entirely by themselves, or contribute actively in the product’s design through a feedback loop process with the architect. The system is versatile and universal due to its discreteness, which allows for a large variety of spatial arrangements and formal aggregations depending on site-specific conditions and future occupant’s desires.

‘I-Architecture’ focuses on redefining the use of a traditional construction component, the I-beam, and studies the potential of its spatialization in aim to design collective social housing prototypes. In an attempt to respond to a more flexible and collective way of future living, the I-part is used to design apartment typologies organised in different levels responding to the variety of domestic activities nowadays. The prototypical building product is a high-rise structure, in view of the upcoming rise of urbanisation within the next years, and is situated in Avila, Spain, one of the cities more severely hit by the 2008 recession.

‘I-Architecture’ is a project by Julia Baltsavia. Julia graduated from Cardiff University with First Class Honors in BSc Architecture  (ARB / RIBA Part 2). The technically-focused academic environment enhanced the tectonic conception of her work through digital analysis, while stimulating her interest in urbanism, with a particular focus on social aspects of design. During her second year, she was selected to participate in a joint design workshop with Taijin University in China to develop transformable structures used to display art. During her two years out, Julia worked at DSDHA, where she got involved in a range of projects and international competitions, such as the Guggenheim Museum in Helsinki. In 2015, Julia joined the Bartlett School of Architecture to graduate from Unit 19 with Distinction in MArch Architecture (ARB / RIBA Part 2). 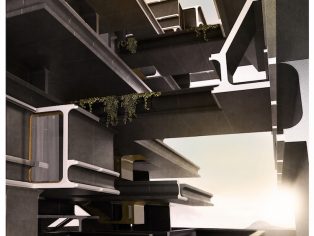