The British take their homes seriously. If we’re not putting up shelves, mowing the lawn or staining the fence, we’re no doubt watching Grand Designs explaining to each other knowingly why that space-age carbon-neutral windmill will never come in on budget. But when it comes to what we really value in a home, the picture becomes more complicated.

How important is energy efficiency? Do people consider fire safety when buying a house? Or long-term maintenance? Or is it really all about location? Modern Masonry commissioned a survey of 2000 home owners and renters to find out what architects and specifiers should be considering when approaching any new build project. Here are some of the core findings: Materials matter

One of the most surprising findings from the survey was that three-quarters of all owners (76 per cent) have never asked what a building is made of when buying it as their home: 23 per cent don’t know what type of walls their house has, and 20 per cent don’t know what their floors are made from. There is, however, an acknowledgement that it matters. The overwhelming majority – 90.1 per cent – thought people should be told what building materials have been used before buying or renting a property.

While they may not consciously choose a home based on its structure the attributes people deem most important are directly affected by the choice of construction materials. It is therefore the responsibility of the architect – and the whole project team – to ensure the construction and the build quality delivers what people value most.

The highest rated of 14 factors when choosing a new home was fire safety – with 61 per cent viewing it as ‘very important’. This was closely followed by durability over a 60-year- plus lifetime (59 per cent), robust construction (58 per cent) and energy efficiency (56 per cent). More people deemed efficient central heating ‘very important’ (56 per cent) than having a garden (54 per cent). Alongside the tangible impact of reducing bills, well-heated spaces also add to the less measurable quality of cosiness – an attribute that was cited by a considerable number of respondents as the thing they love most about their home.

Material choice also plays a part in the crucial quality of sound insulation. When it comes to what they dislike most, the answer was clear: bad neighbours. This was the negative impact that had affected most respondents (33 per cent), and which they feared most (22 per cent). It is hardly surprising that quiet was considered a ‘very important’ or ‘somewhat important’ factor by 91 per cent of people.

Shock of the new

The good news for residential architects is that new-builds have a solid level of support, with 60 per cent saying they would consider moving to a newly completed home (and a further 9 per cent saying they already lived in one). Despite our TV habits, only 6 per cent would describe their dream home as ‘a contemporary Grand Design’ and another 6 per cent a ’Period home’. There also seems to be a general perception that new buildings perform better, in particular on energy efficiency, with the highest proportion of respondents – 50 per cent – voting it one of the main influences behind the design of houses and the materials used.

A climate of confidence

But to maintain, and increase, the trust of the house buying public, architects and the supply chain need to stay focused on the challenges ahead. It will be their responsibility to prevent minor concerns from becoming bigger problems.

It is noticeable that people principally worry about things that they’ve experienced in the past. But the impact of climate change, and the increasing incidence of extreme weather events, will mean unfamiliar perils such as flooding and overheating could become much more common within a matter of years.

Overheating is a concern for only a small proportion (6 per cent) at present, but there is already awareness that it could worsen: 82 per cent said that building construction that could reduce summer overheating was very or somewhat important in their choice of home, though only 6 per cent thought that this was a key consideration in current housing design. Ditto flood resilience: a very or somewhat important factor in the choice of a new home for 87 per cent of people, though only 17 per cent felt it was currently a top priority for designers. This emphasises the fact the housebuilding industry cannot afford to ignore the impact of the future climate on today’s new homes. 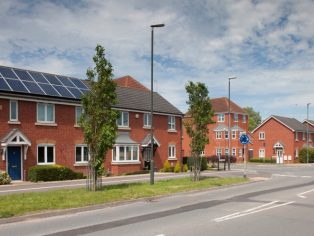