In a competition to advance the fundamental construction technologies necessary to create off-world habitats, NASA awards first prize to team Foster + Partners | Branch Technology. Out of 77 registered teams, five qualified to compete in the final level of the competition held at Caterpillar’s Demonstration and Learning Centre in Edwards, Illinois on August 24-26.

The NASA Centennial Challenge envisions a future where autonomous machines will help construct extra-terrestrial shelters for human habitation. This will also aid the development of technologies that advance fabrication capabilities on Earth. While the final shelter will be a complex assembly of smaller building elements, the focus through the various stages of the challenge is to design and test individual prototypical building elements that can help demonstrate the suitability of the entire process from manufacture to construction and structural performance.

Tasked with producing three beams, three cylinders, and a 1.5-metre dome out of indigenous Martian regolith and recyclable materials, Foster + Partners | Branch Technology won all segments of the head-to-head competition. Performing better than any other team, their dome structure was able to take double the load of a competing concrete dome in the stress test at a maximum load of 1694kg. The competition demanded that all structures be 3D printed within a 22-hour time frame and with the required material constraints, geometric tolerances and autonomous performance. Strength was the ultimate determining factor in the win. As this competition is the first step of NASA’s vision to construct habitats and infrastructure for astronauts on Mars.

Foster + Partners has been looking at the engineering geometry of the structures, while Branch Technology has been focused on 3D printing fabrication technology. Working together they have developed new approaches to materials and methods for this specific project. Developing optimised solutions that are specifically designed for the complexities of space travel, each of the proposals balances cost, weight, and structural performance against the stringent requirements of the long-term goal of extra-terrestrial habitation.

The team thanks the generous competition sponsors: NASA, Caterpillar, Bechtel, Bradley University, and Brick and Mortar Ventures. As well as the support of robotics engineering company Kuka and materials design experts Techmer PM. The next phase of the NASA challenge is currently under development and will focus on fabrication of complete habitats. 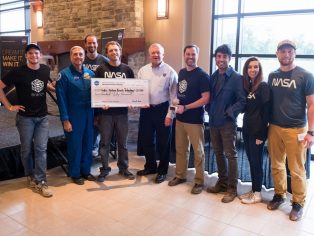