3D printing technology has revolutionised the architectural and engineering industry over the past few decades with rapid prototyping playing an increasingly pivotal role in the design process. This process now also offers myriad possibilities in the construction of prefabricated building components, enabling entire buildings to be 3D printed in the future. Foster + Partners is collaborating with nine leading organisations to explore the potential of metal-based 3D printing using additive and subtractive manufacturing processes that will enable production within a short timeframe.

Foster + Partners was an early adopter of 3D printing and rapid prototyping technology – having bought its first 3D printer in 2004, it was one of the first architectural practices to invest heavily in the technology. In 2014, the Lunar Habitation project, designed with a consortium set up by the European Space Agency, explored the possibilities of remote 3D printing on the moon, an approach that has been further developed for a similar project on Mars. For a number of years, Foster + Partners has also been involved with Loughborough University and other consortium partners in bringing large-scale 3D concrete printing technology to market.

The LASIMM project (Large Additive Subtractive Integrated Modular Machine) seeks to develop large scale and flexible all-in-one hybrid machines that will enable the production of building components (or components for aerospace, energy, and transport sectors) directly from CAD models. The machine will feature a modular configuration of industrial robot arms and a specialised milling robot – the first for rapid arc weld deposition of aluminium, steel, and titanium into a near-net shape, and the second for machining away surplus material to provide the final finish. This process would enable the building industry to move away from standardised components and towards bespoke solutions for every building. It would also mean that these components could be produced within a reduced timeframe at a fraction of the cost.

Foster + Partners is currently providing end user feedback in the consortium based on the requirements of the building industry. To demonstrate the suitability of the technology, LASIMM will create a number of innovative components that have been proposed by industrial partners. 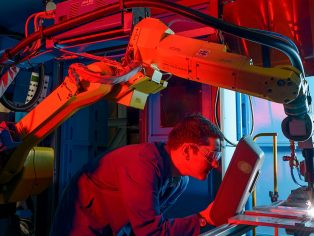