New York-based architecture and development firm FLANK has announced the unveiling of 320 and 360 Wythe Avenue, two significant new boutique office and retail buildings in Brooklyn’s Williamsburg neighborhood that will become the first new timber structures built in New York City in over a century.

The brick and beam buildings, together offering more than 57,000 square feet of office space and 22,000 square feet of retail space, evoke the classic turn-of-the-century New York City industrial and warehouse architecture that financial and technology tenants now covet. Boasting soaring ceilings, oversize windows and exposed wood throughout, 320 and 360 Wythe also offer the benefits of modern ground-up construction, including state-of-the-art telecommunications infrastructure, HVAC, electric, accessibility and other building systems. Construction on both buildings is underway and leasing will now commence, with 320 Wythe set to be completed this coming spring, and 360 Wythe in the fourth quarter of 2018.

“For creative companies seeking flexible new office space with character, Williamsburg is an emerging and enticing alternative to the Meatpacking District and DUMBO, and retailers around the world who are looking at Brooklyn will be hard-pressed to find a better location or buildings,” said Mick Walsdorf, Co-Founder of Flank. “320 and 360 Wythe will expand the limits of traditional construction and usher in a new era of sustainability-minded building practices. This is an important project for Williamsburg, for Brooklyn, and for New York City.”

Steel construction has long since replaced timber as the dominant form of building, but architects and builders in recent years have been pursuing a modernized form of heavy timber construction due to its sustainability benefits, including the reduced levels of waste and emissions that come from building with the carbon negative material. The raw black spruce timber for the beams and slabs used in 320 and 360 Wythe come from sustainably managed Canadian forests that are rigorously overseen.

Directly across the East River from Manhattan and unlike anywhere else in the city, Williamsburg is an energetic and storied part of Brooklyn with a remarkable range of amenities and attractions. The buildings offer close proximity to the East River Ferry and J/M/Z and L subway lines, with Lower Manhattan, Union Square and Midtown Manhattan all accessible in under 30 minutes.

Office leasing at both 320 and 360 Wythe is being handled by the team of Howard Hersch and Michael Berg at JLL. Retail leasing is led by the RKF team of Alex Beard, Eddie Mamiye and Pierce Thompson. For additional information about 320 and 360 Wythe, please visit 320and360wythe.com 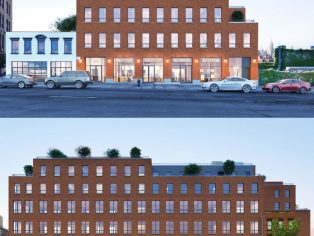 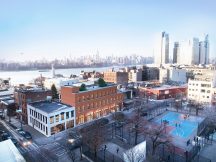