Besblock, which has two factories in Telford producing award-winning concrete blocks, said turnover was up 65% year-on-year. It flies in the face of a national slump which was blamed for dragging down Q2 growth.

“We’re incredibly proud of how hard the team has worked in the last 12 months,” he said.

“They have broken all targets and worked together to take on board new systems and approaches.

“But as well as driving new innovations and efficiencies at the factory, we have developed strong relationships with the biggest names in housebuilding.

“The construction industry is incredibly tough and there are rocky times ahead but we’re performing exceptionally well in the current climate.”

The figures make for incredible reading. Besblock produces the equivalent of a 9km long, one-metre high wall of blocks each and every day.

The firm’s fleet of lorries travelled more than 840,000kms during their deliveries, unloading an average of 1,261 tonnes a day.

The expansion plans will allow the family company, which employs 50 people, to travel further afield taking orders outside the Midlands with larger load capacity. New machinery means the company will also be able to produce more blocks while saving vital energy and reducing greenhouse gas emissions.

“While we have and always will be a family-run firm, this will not limit our ambitions: we are keen to expand production as the market grows,” added Besblock MD Andrew Huxley. 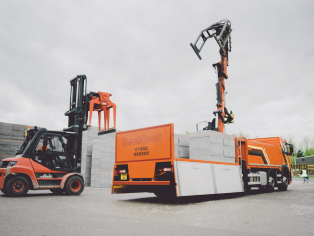