After three years of construction, the recently completed Northwestern Mutual Tower and Commons in Milwaukee is now the second tallest building in the state of Wisconsin.

The exhibit space in the Commons area was thoughtfully crafted by Downstream, a company that specialises in designing interactive ways to choreograph the user experience within branded environments. Inspired by a theme of interconnectedness, Downstream expressed their vision in the fixtures, displays and other physical attributes of the space. The three primary content zones connecting Northwestern Mutual’s historic past with its future as a financial security business required division.

“We liked the idea of having a sense of transparency but also dividing the exhibit area to create partitions to support the interactive display systems.”

Xibitz was tapped to fabricate all of the interactive, custom millwork, which had to accommodate heating, cooling, power and other technical needs. Banker Wire weaved the mesh panels in the specified orientation and then formed them on a press brake before presenting the material to Xibitz who devised a unique way of mounting the panels to the structure. Xibitz tack-welded a thin, magnetic material that mimics the look of stainless steel to create a frame around the large woven mesh panels. Then, Xibitz added wall studs to support the gravitational weight of the massive panels. Approximately 20 magnets were placed around each panel to keep it tight to the aluminium framework that made up the structure of the wall. Brandon Dohrn, a Project Manager at Xibitz said:

“Altogether we fabricated 11 mesh walls with three panels for each side. We were able to emphasise the designer’s vision for a plaid-like pattern of the mesh by doing the panels both front and back. It allows light through and creates a moiré pattern that appears to move when the viewer moves their position.

“This mesh was a wonderful success as it served both a functional and thematic purpose. The material empowered us to take our story theme and make it tangible within the space, as seen in the way it helps focus people on both the digital and physical exhibit content.”

In addition to the successful outcome, this project is geographically significant for Banker Wire since the Northwestern Mutual Tower stands right down the road from where Banker Wire was originally founded in 1896 as one of Milwaukee’s early metal fabricators. Harrison Horan, Vice President at Banker Wire:

“It’s great to see how our product has stood the test of time and remained relevant after all these years as an important material for architectural and industrial applications both within Milwaukee and beyond.” 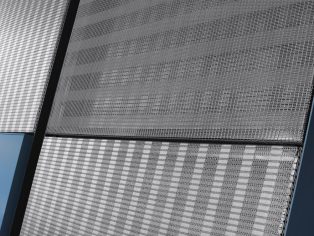