A copper partner for corten

Phase 2 of a major residential development in Bristol is an industrially inspired block of apartments faced in copper, designed to complement a former tobacco company HQ. James Parker reports

Straddling a lake, within 10 acres of parkland, alongside a retail park, the building now houses 127 spacious apartments that benefit from the original architecture, with high ceilings, full-height windows, and balconies. There are a further 143 in the refurbished low-rise podium beneath, and 16 in a converted adjoining east wing overlooking the lake and restored landscape, including an orchard and new allotments.

Sitting between the corten building (which includes 36 apartments allocated for tenants of Housing Association Aster Homes) and the retail park, but lying perpendicular to it, is a large new addition. A long, rectilinear and copper-clad structure sits over a newly constructed three-storey car park, housing 136 apartments. Simply titled ‘Copper Building,’ this striking edifice replaces and takes cues from the demolished Imperial Tobacco cigarette factory which previously sat on the site. It also provides a complementary materiality to the corten steel which in turn enhances the robust semi-industrial appeal of the development as a whole.

The project architects Ferguson Mann say that “without the factory building, the north edge of the site felt incomplete, so we wanted to create a design that would reference the previous building in form and language.” The new form encloses and provides a punctuation to the site along the road which divides it from the retail park, and completes the approach and entrances to the existing building by integrating entrances across the site.

Genesis
FMA had a track record of working with Urban Splash on similar major refurbs, including working on an array of “fantastic listed buildings in Plymouth,” project architect Nick Brown tells ADF. In 2003, the developer purchased the derelict site in the south west of Bristol, and FMA were appointed to help “bring it back to life.” Phase 2 was a Design & Build contract with FMA working for Urban Splash, before being novated to contractor WRW Construction.

FMA has a strong history in the residential sector generally, across a wide portfolio of projects from masterplanning to single bespoke homes, and larger apartment developments such as the Lakeshore scheme. The context for the project is a high need for good quality homes in the areas, especially ones with large areas of external green amenity space, says Brown.

One of “countless challenges” on the project, reports the architect, was a site that was difficult to develop. He says that the Copper Building element itself became a problem when the overall project had to be split into several phases due to the 2008 recession. However, the architects were keen to work with Urban Splash again, Brown describing them as a “visionary client, with a habit of transforming unloved buildings and places.” FMA were excited to tackle what was “a hugely interesting existing building, with the landscape and the lake,” despite the severely derelict nature of the site.

Another challenge faced by the project team was a delay before the Copper Building began construction (it had been intended it would start immediately following Phase 1’s completion). On the back of high demand, apartments in that initial phase became fully occupied, and the contractors had to deal with a tight site plus new residents in an adjacent building, and a live 24-hour car park.

Brief
The client’s brief to the architect was to create an “enjoyable and special place to live, rather than delivering a certain number of units,” and this freedom helped the designers to make something which matched their vision. FMA worked closely with the developers to hone the proposals over “a number of years,” including those for the Copper Building itself. It consists of a mix of one-bed, two-bed and duplex apartment types.

With the project having to be split into phases, after phase one was completed in 2012 the architects took the opportunity to revisit the brief for the new building. With the form already having been fixed by obtaining planning approval, the architects reordered the interior to ensure the maximum number of rooms would benefit from south facing views. The layout and elevations, including the fenestration arrangement, ended up completely different in the reconfigured version.

The architect says an “innovative section at top floor level” creates a dual-aspect duplex in order to maximise the number of south facing rooms; all have open plan living spaces and views across the lake. South-facing balconies, each of which are full apartment width, allow residents to make the most of the views. The entire elevation has floor-to-ceiling sliding glazed doors so you can open the living space onto the balcony. And being enclosed on both sides means they can function as another ‘room’ that can be enjoyed all year round.

Form & structure
The “rigorous” 3.6 metre-wide structural grid that defined all elements of the Mies-inspired Phase 1 building was a “key driver” in the Copper Building’s design, says Brown. He adds that the designers “played with this principle to bring more variation to the facade,” including a mix of 3.6 metre, 7.2 metre and 10.8 metre bays to support the mix of apartments.

The structure is a simple reinforced concrete frame with columns and flat slabs, plus a lightweight SFS infill and rainscreen cladding. Although the car park delivered during Phase 1 was designed to have the new four-storey building sitting above it, the fact that they ended up being constructed at different times created challenges, Brown admits. A key part
of the brief was also to create “generous and inspiring” common areas, and the full-height atrium entrance area is one element that fulfils this.

As well as being clad in a manner that complements its corten steel cousin, says Brown, the two buildings were further brought together by the creation of a new entranceway “that opens up a view down the original structure, echoing that now lost connection between factory and office.”

Materials
The building was originally planned to be clad with corten steel cassettes to match the existing building’s facades, and also tying into the history of the factory that occupied the site. Budget considerations once the project had been phased meant that corten became unviable across the 180 metre-long volume, however the architects also had reservations about it being “a bit unfriendly on a residential building of this scale.”

The architects settled on a specification of Nordic Brown Copper manufactured by Aurubis. Brown explains this choice: “We needed a material that was going to speak of the industrial heritage of the site, yet in a warmer, more refined way.” In addition, as it was a largely north-facing facade, the architects wanted a material that would patinate subtly over time.

FMA had recently used the same durable cladding on another building, although the Copper Building was designed first – “it took longer to deliver due to its larger scale.” However Brown adds that this delay did mean that the designers had the benefit of seeing the copper on the other project weather slightly before it was installed here, reinforcing their expectations.

Precise execution by the contractors was key to success, as the thin reveal trims needed to align with a vertical cladding seam both above and below, but the window locations alternated from one bay to the next across four storeys. Close coordination between trades was crucial to ensure that the tolerances could be accommodated, with little margin for error. At the outset, the installer set out a full-size bay to review the various problems with the architects, allowing details to be refined into a workable solution, says Brown. He is pleased to report that they “executed the finished cladding to perfection.”

In fact it was the bright yellow PPC aluminium reveals of the variously sized windows that caused more of a design challenge, in terms of how they would appear in the finished result. Providing the intended playful contrast with the more restrained copper hues, they required more experimentation, which was undertaken through a series of onsite mockups.

A standing seam envelope with variations in spacing of that seam was a further
device to “enliven the elevations” which appears “quite random at first,” says Brown. However, there’s an underlying pattern of bays and connections between alternating windows.

Sustainability
The project as a whole offers some innovative design which harnessed the benefits of the original structure to provide sustainability benefits. For example in Phase 1 the new central atrium brings in light to the deep plan but also enables passive design measures such as stack effect natural ventilation of apartments. The project achieved an EcoHomes ‘Excellent’ rating thanks to high external wall insulation levels, and a combination of ground source heat pumps using boreholes, and biomass-powered underfloor heating.

On the Copper Building, the highly air-tight envelope includes triple-glazed windows, and the south facing elevation maximises useful solar gain and daylighting. The footprint of the new building is within that of the previous factory building so the ecological impact has been minimised, and surrounding vacant and underused areas have been repurposed as allotments for the residents, while the lake has been decontaminated to benefit biodiversity.

Conclusion
This is a project which tackled a hiatus and being split into two, but architects used it to their advantage, reengineering for a better end product. Another piece of pragmatic design is that in choosing copper, the design doesn’t quite replicate, but works with the now fashionable weathered looks of a worthy example of 1970s commercial architecture, retained for the future.

Now the two buildings sit comfortably together, metal-clad relations with differences and similarities, and in that sense replicating the natures of the office and factory that were inherent to the personality of the site. Brown concludes that the architects felt they “would have a conversation with each other without having to be an exact replica of the materials used.” The warm new copper look has gained the project strongly positive feedback from locals, which speaks to the carefully controlled specification as well as design by FMA. 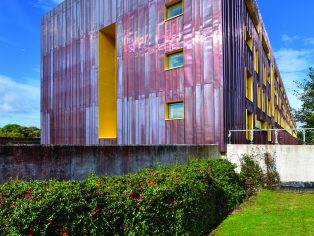 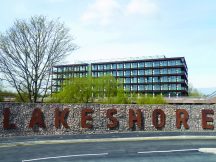 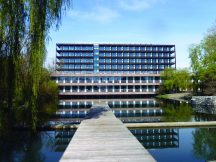